A Saturday night in Bath followed by an early start in Manchester the following morning left me with something of a dilemma, football wise – Bath City or Bristol Rovers?

If it had been any other Sunday, I’d have done both plus dropped by Ashton Gate for a bit of Bristol City. As it was, I had the mrs in tow, and needed to be in Manchester early on so I really had to narrow it down. After giving it way too much thought than was necessary, I decided that the name of the game is really visiting the stadia of the place I’m in, and so I settled on Tiverton Park. And I’m sort of glad I did. 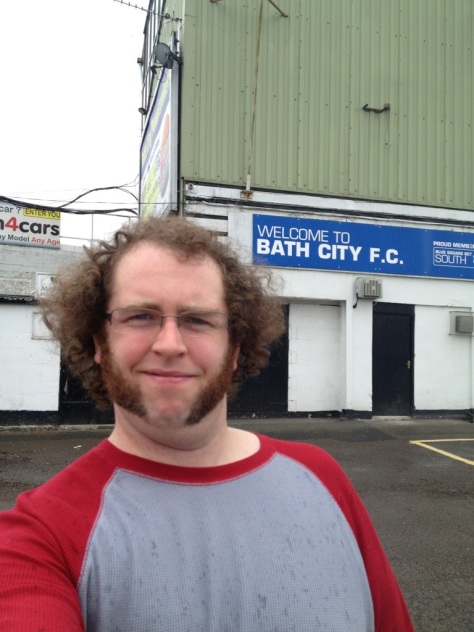 It’s a grand old ground, one that almost looks too big for the level of football it hosts (Conference South), but it seems proper. There’s old terracing to give it the feel of a proper ground, a big massive grandstand and good old fashioned turnstiles. Also, you have to walk up steps to get in.

That might not seem like a massive deal, but my earliest memories of watching football as a child involved walking up steps, reaching the top and then seeing a lush sea of green below. I don’t know what it is about that elevated position that makes the grass greener or the view any more exhilarating, but it’s something missing on a lot of ground level football stadiums.

With time being of the essence, there was little time for anything other than a mooch around the main stand, although it appears that there’s only really one side of the stadium you can get in through. I could be wrong – one thing is for certain though, and that’s Bath’s insistence on being pleasant and welcoming to officials with various signs discouraging disrespect or foul language. It’s a really lovely touch that wins them massive points from me.

One let down was the bloke who wandered out of the main entrance and stood there with a cigarette, glaring at me as I took my photos. Maybe he’d have been alright if I’d approached, maybe he was waiting for me to make the first move, but he had an air of hostility about him that made me glad to get back in the car.

Aside from him, this is a beauty of a non-league ground. 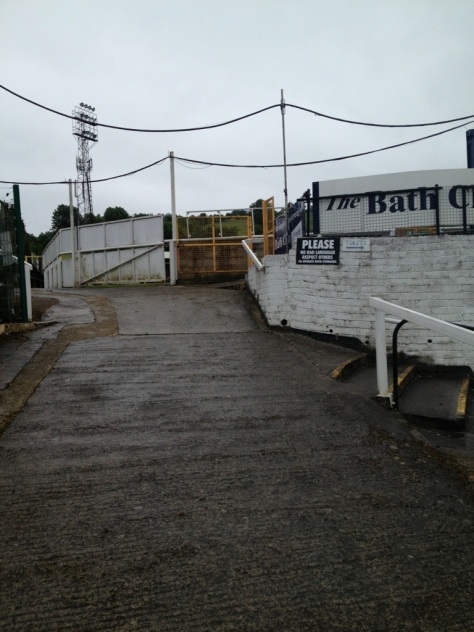 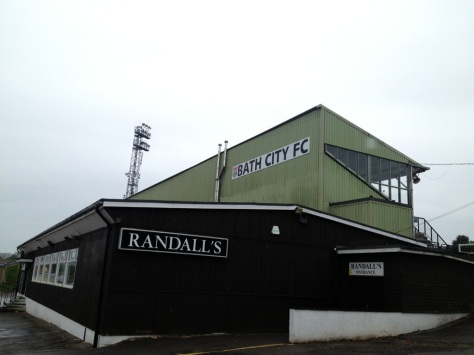 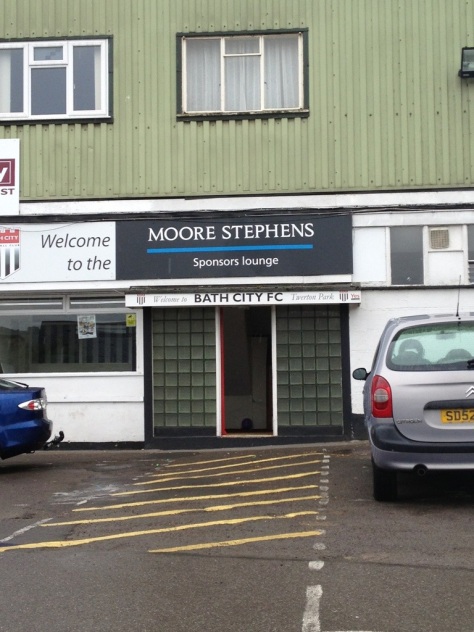 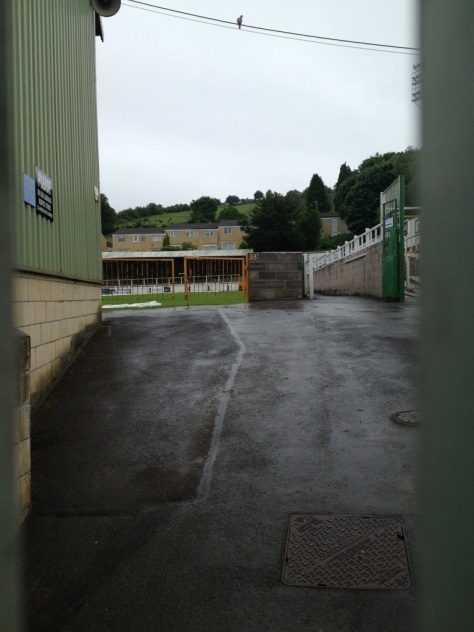 A weekend of gigs in Liverpool should, by the letter of the law, mean a trip to either Anfield or Goodison Park for a meander around however I ended up staying with my dad in Blackpool. 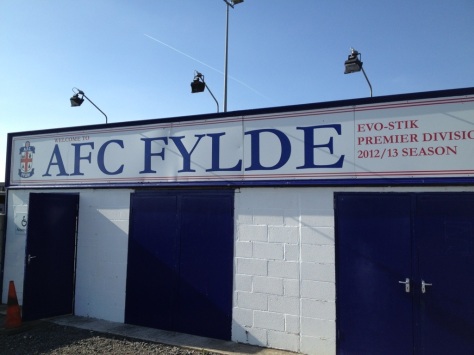 “Not to worry,” I hear you cry, “we’ll settle for a saunter round Bloomfield Road.” Erm, not quite. After arriving late in Blackpool on Friday night and drinking way into Saturday morning, me and Papa Fury were nursing sore heads but in need of a football fix. With Blackpool away to Brighton, we decided to take in the nearest game to us, AFC Fylde vs Stafford Rangers in the Evo-stick League.

Fylde, located on the coast about 10 minutes from Blackpool, presented an enticing day out. Managed by Dave Challinor (of 1990s long throw in fame) and backed by a wealthy chairman, their current ambition is to reach the Football League, and with plans to relocate from their Kellamergh Park home this may be my only visit there.

Our arrival presented us with a well-run club in a tiny stadium, albeit packed out with around 400 of the friendliest football folk you could wish for. Perched in the middle of farmland with plenty of onlooking sheep, there were three brand spanking new stands (one genuinely about the width of the goal) with standing on the far touch line.

There was a ridiculous oversized scoreboard and the bizarre sight of a TV gantry. Coupled with old farm buildings for changing rooms and a refreshment hit and some portakabin executive boxes, it was a ground oozing enough quirky charm to appeal to me! 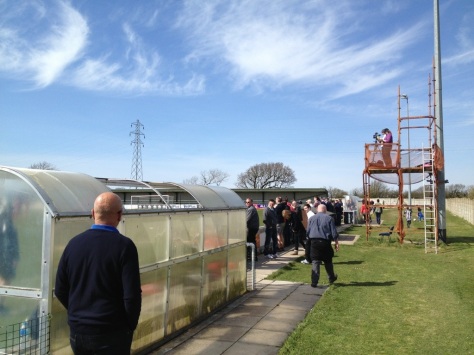 We plonked ourselves beside the away dug out and were bored senseless by their gobshite manager, albeit mildly amused by his constant whining and bullshit, which was peaked by one of the club officials telling some passing fans at half time “we’re gonna need a big performance from you lads in the second half.” A chairman giving his fans a half time pep talk? He managed to sound an even bigger tit than Delia Smith, despite his apparent sobriety. Shame on you, weird Stafford fuckwit! The worst bit was realising that with Rangers being slap bang in the middle of the table, they had absolutely zero riding on this result.

Nevertheless, it was an enjoyable albeit dull game in pleasant surrounds. Whether Fylde achieve the dreams their backer has for them I don’t know, but Kellamergh Park, aside from being the most difficult name to spell in world football, was a pleasant experience. There’s absolutely nothing to it for a fan of stadia, so I couldn’t recommend it for stadium spotters, but it’s well worth a visit if you’re after taking in a random match at a welcoming club. 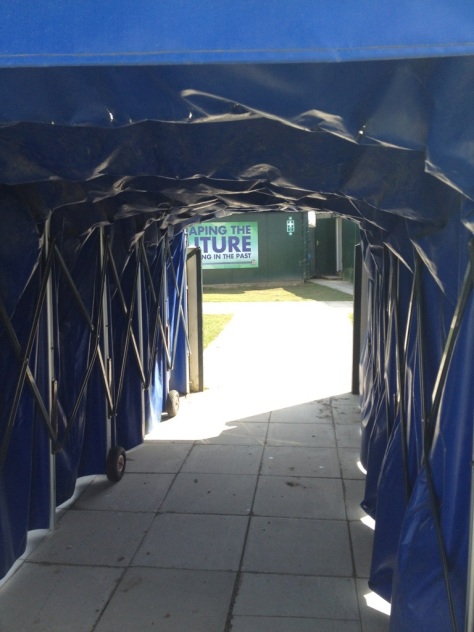