Just outside of Dunfermline was this little treasure that has every right to score a record low on this blog yet shines in the midst of adversity.

I’ll list the negatives. You can’t see any stands from the outside, in fact you can barely see anything from outside, there aren’t any turnstiles visible or even the all-important steps up into the ground. You can’t walk around it, and a little fenced off garden means you can’t even peer over it. My photos of the belly of Blairwood come from sticking my camera in the air (like I just don’t care – sorry, I couldn’t resist).

In fact pretty much all that’s visible of Blairwood Park for the passer-by is a retaining wall. But what a retaining wall it is. A beautiful ornate piece of stone with a simple painted notice of whose home this is makes it go from an infuriatingly invisible adventure to painfully quaint.

In all honesty the only other feature that was roughly visible from outside was a park bench perched within the grounds. There’s one at Alnwick Town’s St James’ Park and it’s always a surreal and homely addition.

Best of all? The sign outside trying to identify the solitary dog owner responsible for fouling the nearby area. No suggestion that it might be more than one person, just someone working alone. Brilliant.

Further online reading (and the slightest piece of visible evidence) points to a stand behind the wall, but it would be impossible to mark it and award it points here. Harsh, but that’s not what we’re about here.

So is it suitable for the tourist? It depends. For me, that one little wall made it wonderfully worthwhile, but if that’s not to your tastes then absolutely not. It’s close enough to Dunfermline to make sense though. I’d give it a slightly shaky but definitely there thumbs up. 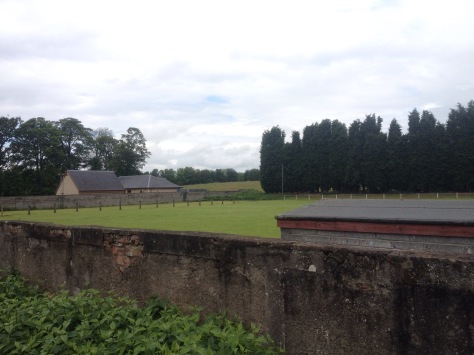 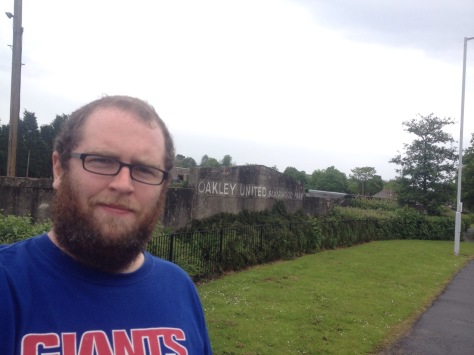 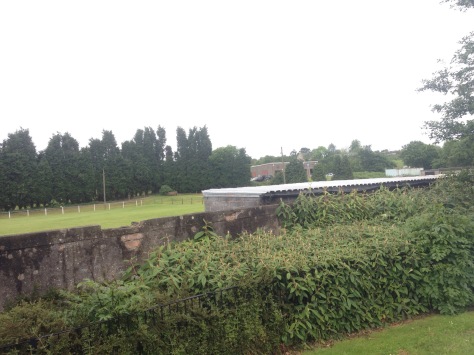 After last week’s visit to Gloucester we’re back on the road during mine and Lee Kyle’s Highland fling. It has to be said that after a dozen football grounds of varying levels of impressiveness, this was the first one that felt like a proper stadium. As soon as it came in to view there was a feeling that this was what it’s all about. 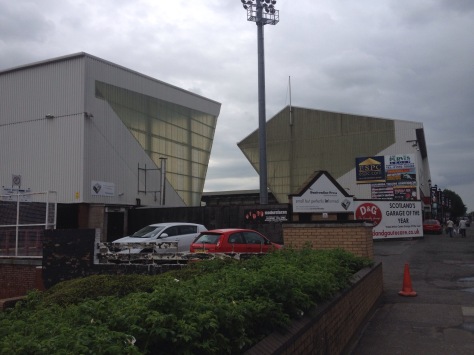 I genuinely loved some of the junior grounds we visited but this isn’t just a stand and a couple of dug outs, it’s the real deal. Glass fronted doors at the entrance, four stands that surround the pitch and can be seen from a distance, in contrast to Rosyth a week or two back this feels a little bit special.

Also, unlike our last Scottish instalment, it was a doddle to grab a sneaky look inside. Whether it was due to it being summer, or a general lack of interest from your average joe, a side gate was open and doubled as a car park, meaning I could pop in and see the interior.

It’s a lovely imposing ground too. Three big stands surround the pitch with one smaller and presumably older one having not been upgraded yet. I suspect there’s no reason to either and with that stand being hard to access from the outside, it means it doesn’t stand out so much to the tourists amongst us. 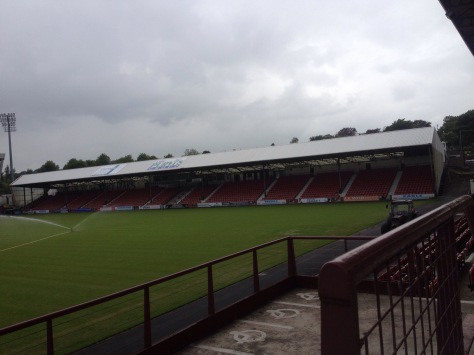 East End Park also scores highly in the “closest ground to an Aldi” category of our awards, too. Perfect for some cheap food as I made my way onto the next ground!

In summary, it was pretty much the perfect visit despite a lot of the ground being away from public access. You can’t walk around it but you can go inside and for me, coupled with some decorative turnstiles, means it scores very highly indeed. 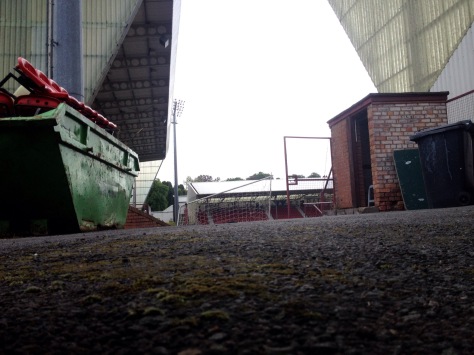 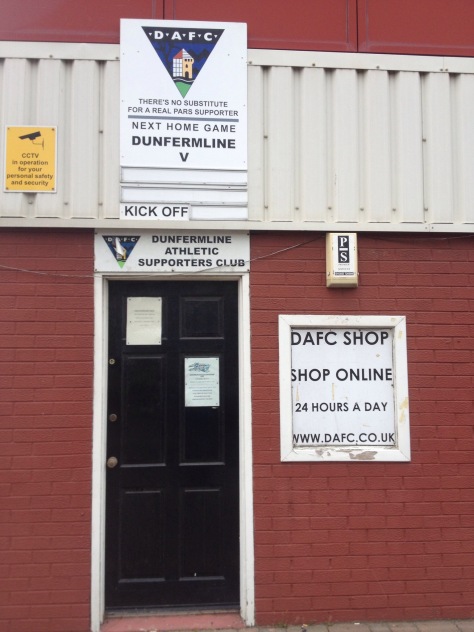 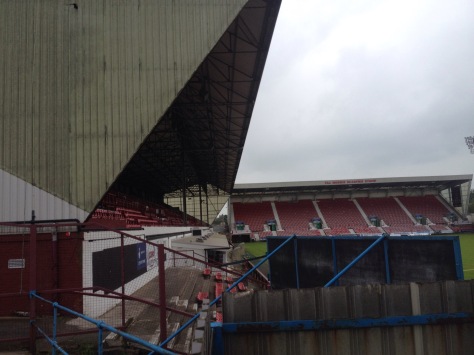 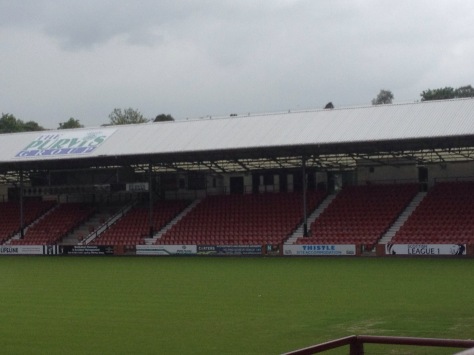 I know that I promised an English ground last week then went back on my word and flung Rosyth in your face instead. It was a genuine mistake born out of frustration after realising I’d accidentally deleted evidence of trips to Coventry and Rotherham. 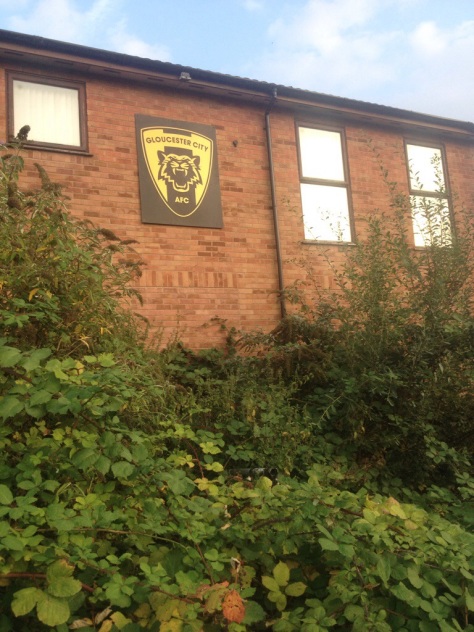 So this week I’m hoping to make up for it with something a little bit special and, more importantly, English. Because the former home of Gloucester City is something of a celebrity stadium.

I was struggling for time and keen to do Bristol City’s Ashton Gate but something in the back of my mind told me this was a far better bet. Most likely a niggling suspicion that it won’t be around much longer but regardless, I can’t recommend this stadium enough.

I’ve had to borrow the above photograph but it’s a well known picture from the floods that hit the South West of England back in 2007. It’s actually of Meadow Park and the resulting damage means Gloucester have never played there since.

The ground has instead lay empty and let nature take its course while the club have tried to survive playing at the homes of Forest Green Rovers, Cirencester and currently Cheltenham. These photographs are basically what happens to a football stadium when it’s left to rot and it made for a fascinating visit. 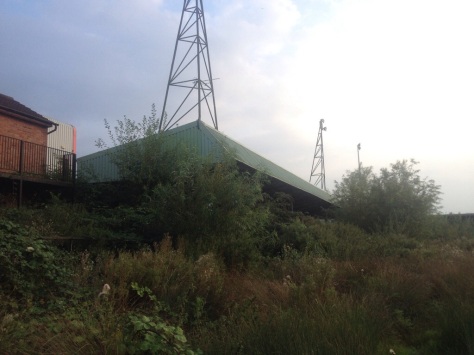 I went on a Saturday evening when the adjoining skip hire company were closed and that’s probably for the best if you want a decent view inside the ground. Nothing is fenced off but I suspect you’d be chased away so pick your time carefully if visiting.

It’s almost impossible to put the stadium itself into words. Overgrown with trees and bushes both on the pitch and in the stands it’s an incredibly sad but fascinating sight.

I had assumed that one large mound behind a goal was previously a terrace that had become overgrown but no, further examination showed it was literally just a huge amount of rubble that had washed in and landed on the pitch. The terrace was behind it. And so it was possible to stand where fans once had to watch their heroes and instead look out at trees and bushes.

The amount of greenery coupled with a lack of time made it difficult to explore fully but one stand is pretty much ruined along a touchline while the other is standing, but only just. Seats are visible amongst trees growing between them and it’s the same for the other terraced stand too.

Basically the whole thing looks like the scene from a post-apocalyptic zombie movie and it’s incredibly moving. As a Sunderland fan it hurt to see Roker Park demolished but to have seen it locked up and left to rot is a feeling I’d struggle to replicate. 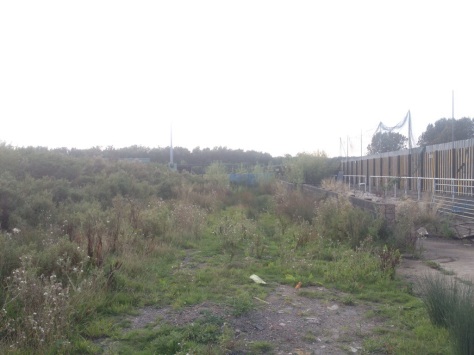 The club themselves seem desperate to move back to the city and plans are afoot to return to the Meadow Park site, albeit completely rebuilt. It must be incredibly difficult to even survive, and I genuinely hope that they do. This is a one of a kind ground that probably won’t be there much longer so it’s well worth visiting. I’d even go so far as to say it’s the most memorable that I’ve been to so far. Favourite seems the wrong word considering its state but it will stay with you a long time. 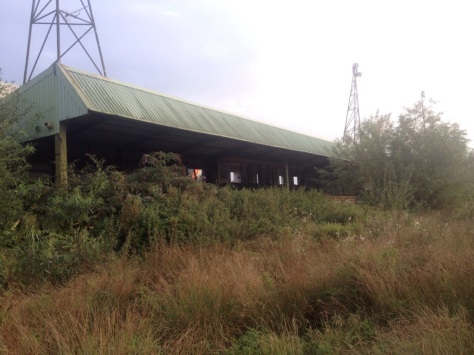 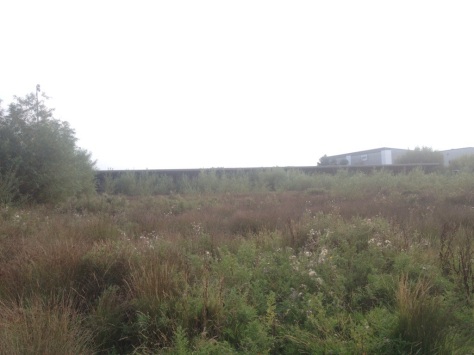 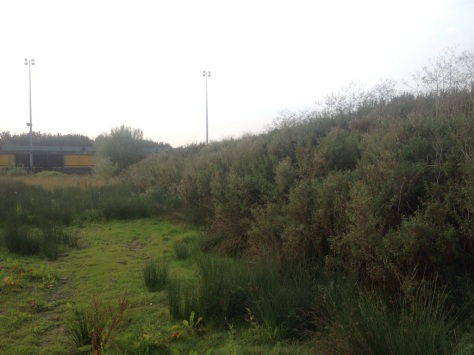 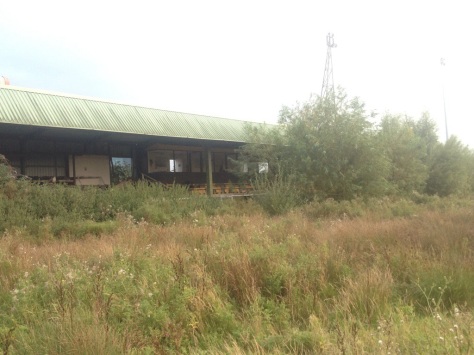 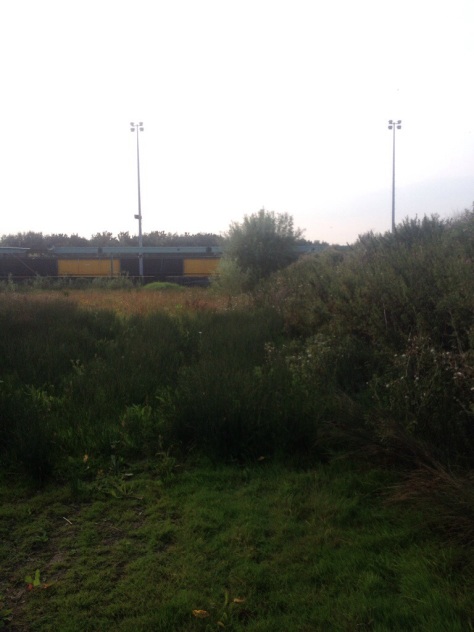 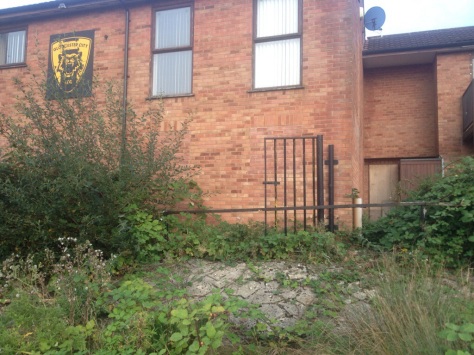 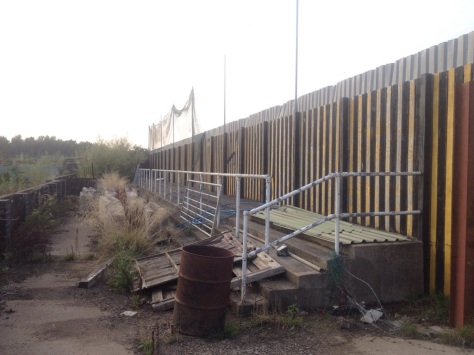 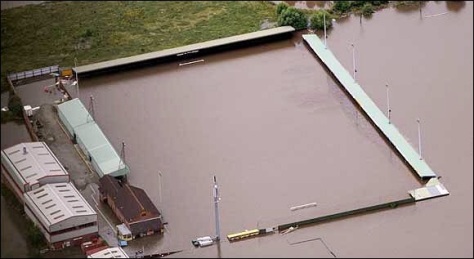 You can buy my FA Cup book by clicking here.

Although I took in one ground without Lee on the first day, this was the start of doing the solo slog proper. I woke up in a hotel in Edinburgh with a rough route planned and nothing but myself to stop me.

Although it felt a bit special, hitting the road with only a dozen football grounds between me and Glasgow, the truth is that Recreation Park wasn’t the most spectacular way to start the journey. 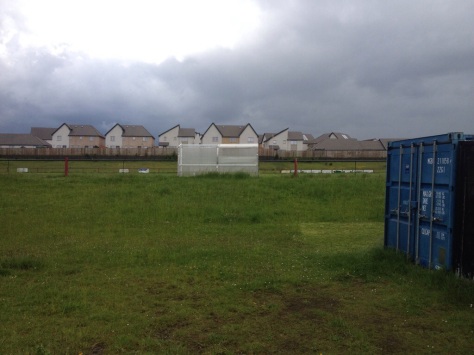 Based just outside of Edinburgh, there’s not a lot to it, and hardly anything to see from the outside. It’s got floodlights, which is a big deal compared to a lot of junior football grounds we visited, but not much else.

There was an overgrown terrace behind one of the goals which seems an almost staple feature at this level and is certainly likeable. And that is honestly about it. 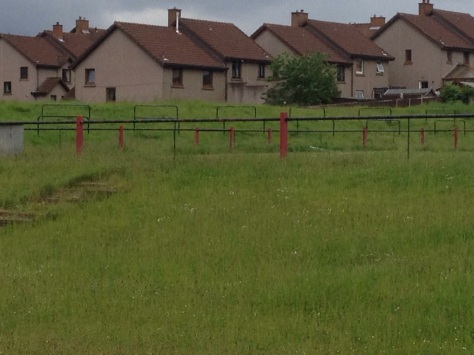 A ramshackle but lovely looking clubhouse and some steps leading up from the changing rooms to the pitch and you’re done. It definitely wasn’t the best way to start off the day.

In terms of what there is to see from outside it scores pretty poorly really. It might be okay to satisfy the most obsessive of completists but you’ll struggle to feel like you’re stood outside a football ground. 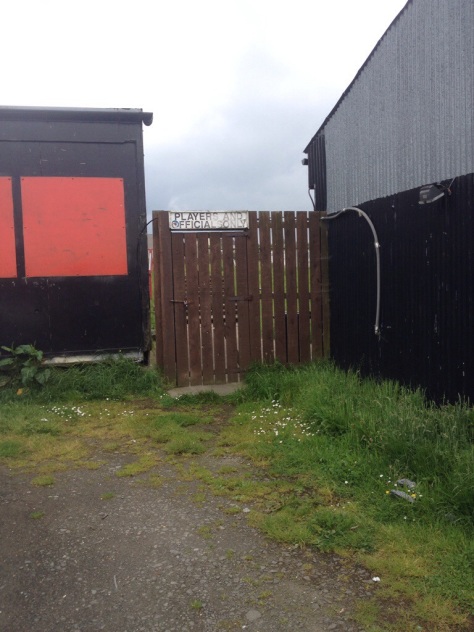 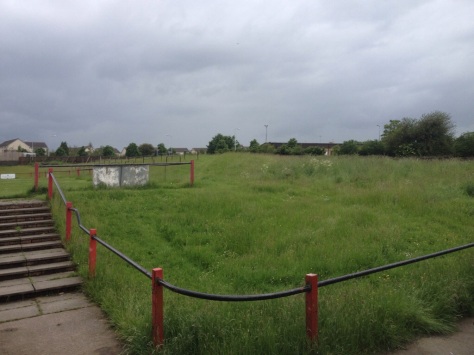