I desperately wanted to hate Selhurst Park. Every football fan I’ve ever known has hated visiting it, Sunderland were relegated there in 1997, and we were cheated out of a play off final at the hands of Palace a few years after that.

But looking at it as a neutral, Selhurst Park borders magnificent. And I hate myself for saying it. Half the ground is a bloody Sainsbury’s supermarket, one stand is entirely hidden by some houses and a nightclub, there’s not an inch or real estate that Palace haven’t pimped out. In fact, Selhurst Park must be the only ground in Britain where there’s a turnstile next door to a minicab office. Hell, let’s change that to world football.

Yes this is a ground absolutely wedged into the heart of its fanbase. It’s bang in the middle of housing, old pubs and the very community it’s there to serve. It’s clad in nice new shiny signs, but not in an overly commercial way, just in a “let’s make sure this is tidy” sort of way.

There are the odd quirks – the main one being half of the ticket office devoted to purely selling programmes. That’s the sort of weird thing that floats my boat. And a ticket office with some of the smallest windows I’ve ever seen in my life. I’ve no doubt that some of the sight lines are awful, and there’s no doubt it’s an absolute bastard of a ground to travel to, but that shouldn’t lose it points.

It also has the holy grail for ground-hopping stadium tourists like me – the ability to peak inside. Don’t get me wrong – there’s not a lot to see, but ten yards of the pitch and a stand will do for me – we all know stadiums differ hugely on the inside and out.

There’s also a wonderful old-school grandstand that actually sits behind one of the goals, a hotchpotch of old stands around that and enough spunk about it for me to have enjoyed a wander around there. 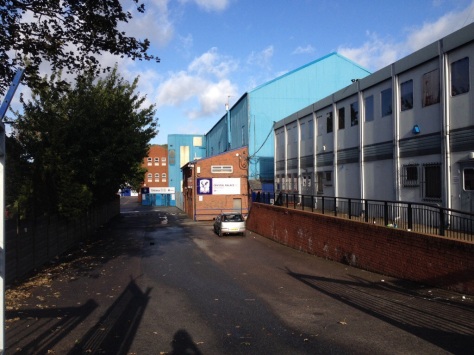 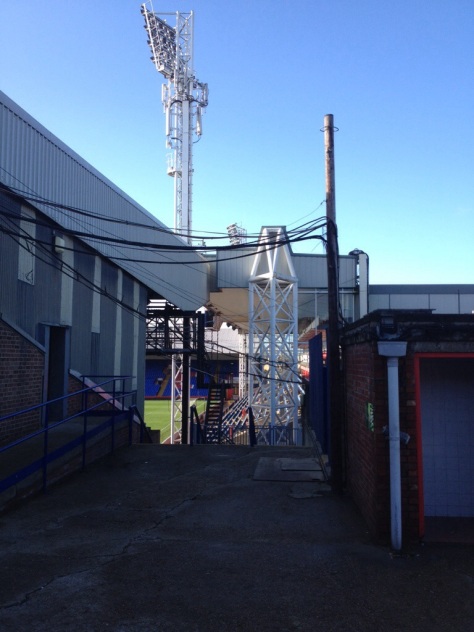 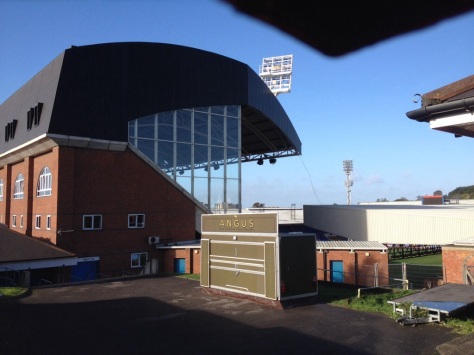 It almost feels disingenuous to include St James’, but seeing as this blog is run as a dictatorship, I’m calling the shots and putting it in, jumping the queue ahead of a whole host of clubs from the Premier League to far lower than this.

The main reason is that I’ve started something of a love affair with Alnwick Town. They recently advertised season tickets for the remainder of their Northern League Division Two campaign for £20 and as a fan of both football and a bargain, I snapped one up.

I’d not been to St James’ before and after two visits I’m still uncertain on it, although there’s no denying it has charm. You enter through a turnstile and straight into the club car park, which also serves as a hard standing area directly behind the goal too.

I’ve tried standing there once but bizarrely the view doesn’t seem brilliant, I think that’s down to my personal preference rather than anything else, the constant rain probably didn’t help matters. 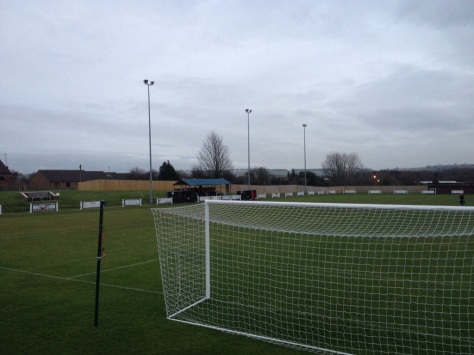 Alongside one touchline is the clubhouse with a small area of covered standing, and behind the other goal is a covered stand with a bench in, but really it’s best to call it a terrace. Either way, it’s a unique structure that adds to the charm of the place. 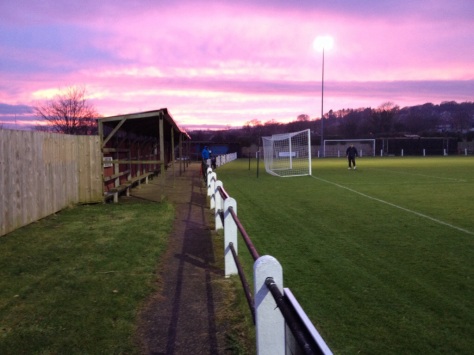 If we’re talking about charm and character though, then we’ve definitely saved the best till last. Alongside the opposite touchline is a seated stand, made almost entirely out of wood and absolutely adorable.

Adorable seems the wrong word to use when describing a football ground, almost patronising, and I want to make it clear that I’m not. The amount of effort that must have gone into this is nothing short of incredible. 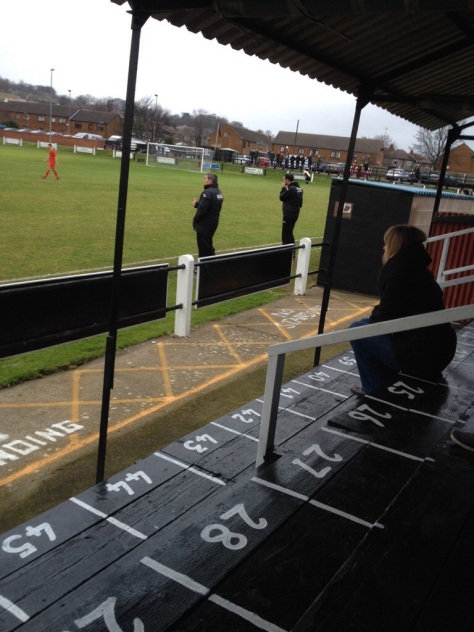 Hand painted seat numbers top it off so much that it doesn’t really matter if there are holes at the back and on the roof to let rain and wind and cold in, it’s as much a work of art as it is a piece of engineering/carpentry. Coupled with surely being one of the only grounds in the country which also houses a park bench to watch games from, I feel my £20 has been wisely invested.

Alnwick’s a long way to travel just to look at a football ground, so it’s not one I’d recommend a specific visit for, but if you do find yourself in the vicinity or with a desire to go you won’t be disappointed. 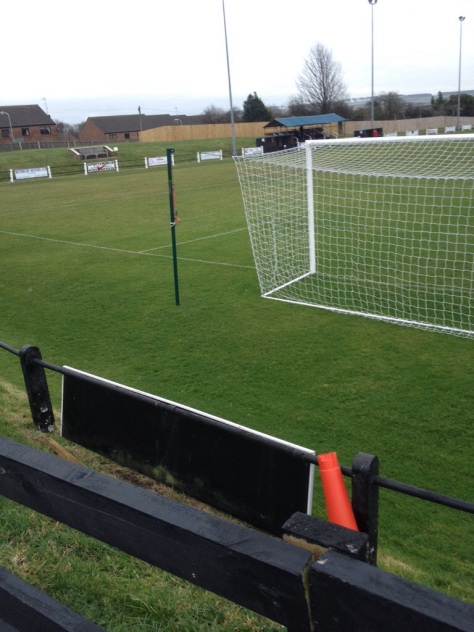 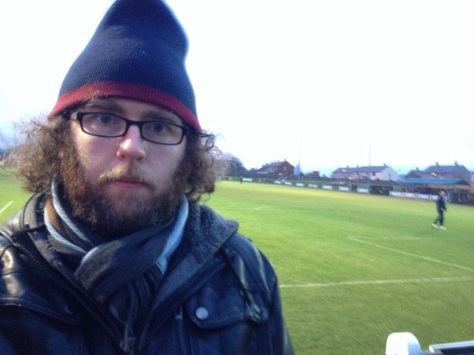 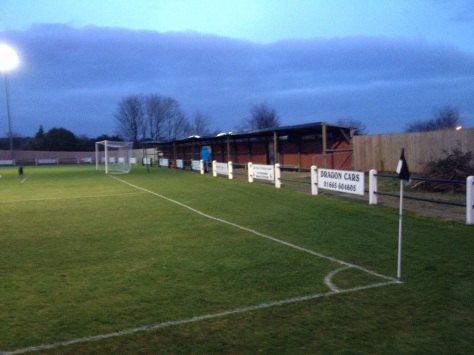 Yes, I know. And if you don’t know, you shouldn’t be reading this blog. The Checkatrade.com Stadium. It’s a lovely little venue but what’s wrong with calling it Broadfield Stadium?

Obviously money is a massive factor especially at this level, so you can’t really blame clubs for squeezing every bit of cash available, but it’s not great for us romantics. It is, was, and always will be The Broadfield Stadium. Not the stupid.com arena. 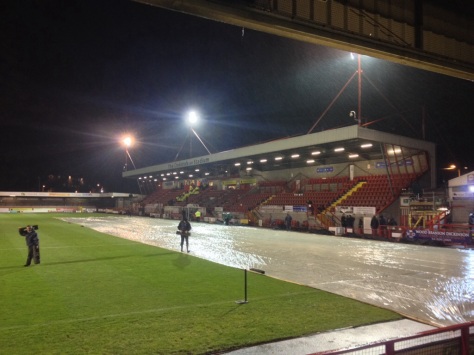 The Checkatrade, for want of a better abbreviation, is one of the newer grounds we’ve reviewed here, having been built back in 1997. It feels like its still to fully develop its own character, but it’s getting there.

Banners hang behind the home end, and it has a lived in feel with some top supporters making it a homely place to watch a game. The Smith and Western Stand was purchased from Brighton’s Withdean Stadium and while it’s a reasonably unattractive side of the ground, the name of it and its history makes it passable in my eyes. 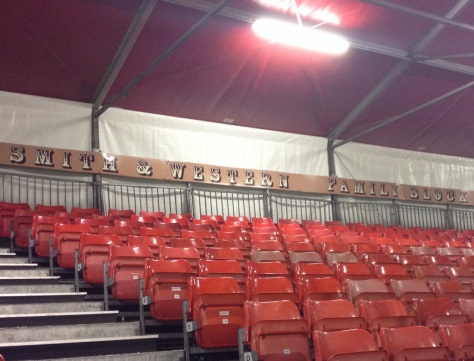 Two identical terraces at either end coupled with an impressive grandstand make this an interesting place to visit. Not inspiring, and not a lot of character, but the fans inside give it a charm that makes a journey here enjoyable. 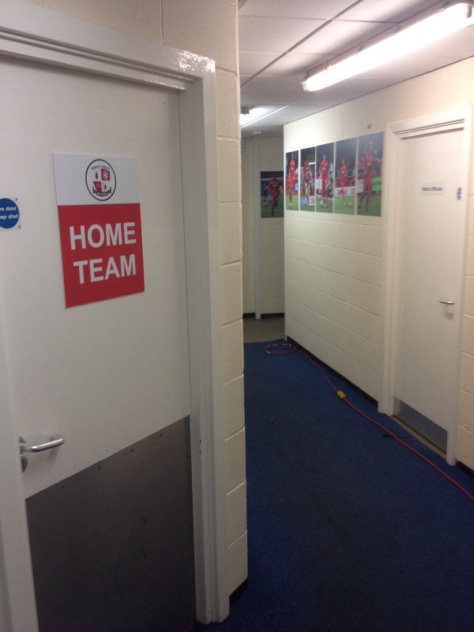 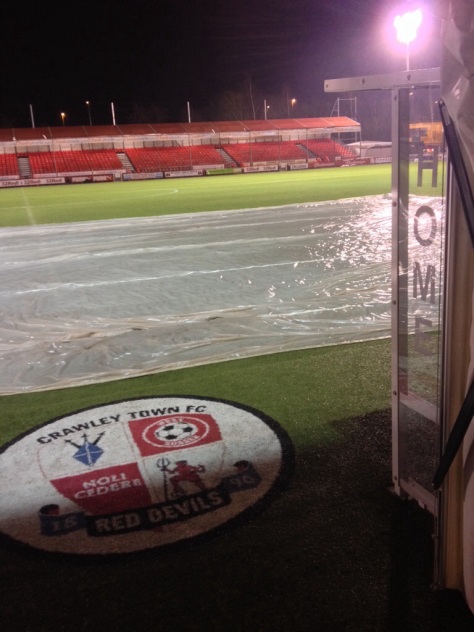 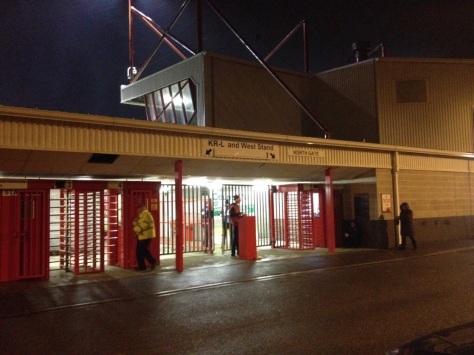 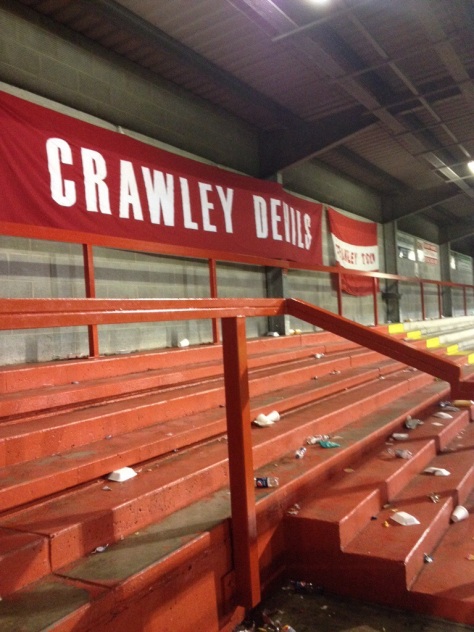 The Vic Couzens Stadium, or Kettering Road as it’s better known, is a lovely little non-league venue. It’s just a shame that this season is to be its last.

Being tucked away almost in the centre of the beautiful Lincolnshire town, after over 100 years of loyal service it’s making way for housing whilst the club moves out of town.

It’ll be a travesty when the bulldozers move in. Granted, there’s not much to get rid of, but what is here is a wonderful reminder of proper football. That, and you can see six different churches from the ground. There’s been no ratification but that can’t be far off a record. If nothing else it pretty much guarantees a picturesque setting.

As for the stadium itself, a seated stand a few rows deep with a players’ tunnel that is basically two sheets of green plastic is the biggest structure here, yet it’s charm personified. Painted in club colours of red with their “SAFC” initials in big black lettering on the top, the faded colours may have seen better days but there’s clear evidence of love for this place.

The other side of the pitch houses a covered standing area that only covers half the length of the field, but it doesn’t make it any less loveable. One goal houses a sort of attempt at open terracing and the other is just grass with limited hard standing, but there’s not a lot of room to expand here anyway.

I was wary of the naming issue – it only seems to have become the Vic Couzens Stadium this year, and it seemed hugely disappointing to name the venue after a used car garage or something similar. Thankfully, a bit of digging reveals that Vic is in fact a local retired building contractor who has sponsored a huge variety of grassroots teams and charities both locally and nationally down the years, and been particularly kind to Stamford in the process.

The site itself has been hosting Stamford matches since the 1870s, which is quite remarkable and disappointing that so much history is set to be built on, but with the club in caring and supportive hands at least there’s real optimism for their future.

Definitely worth a visit while you can. 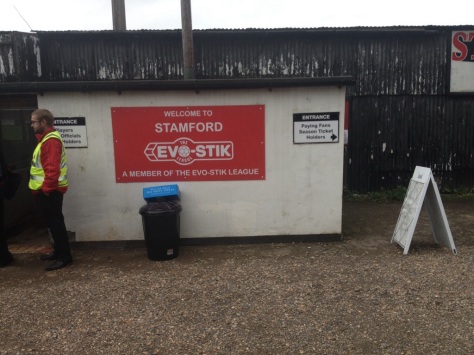 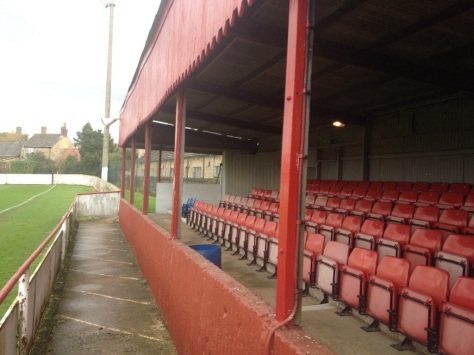 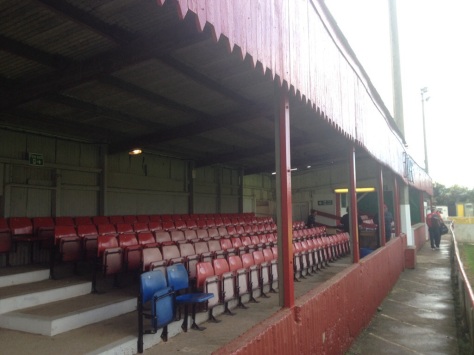 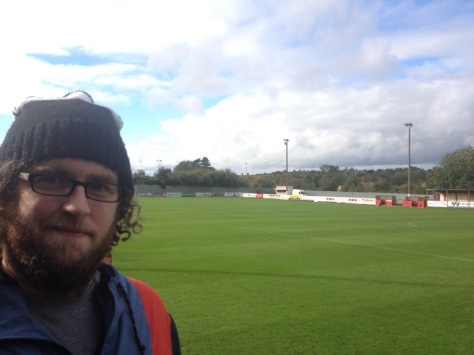 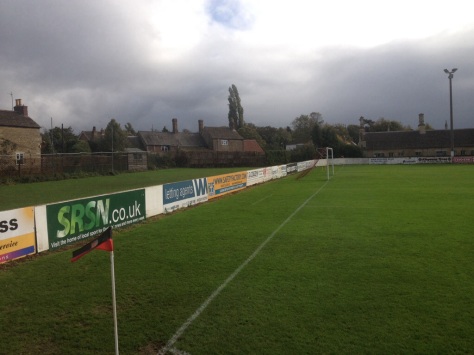 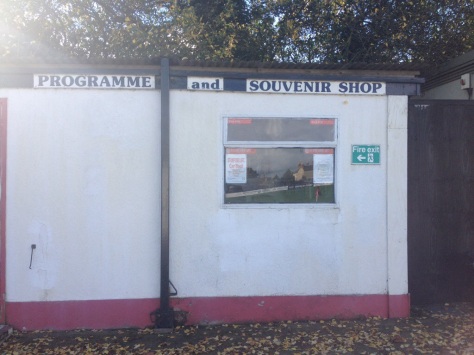 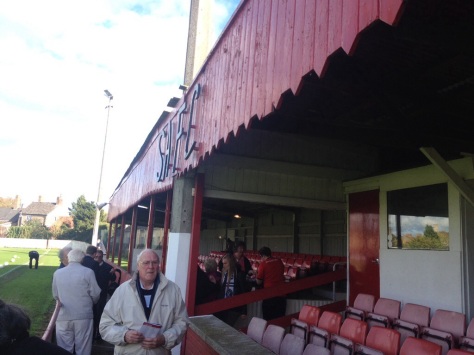 This one barely counts as a stadium, but a gig in the Scottish town of Kinghorn meant I couldn’t resist a trip to the local football club. 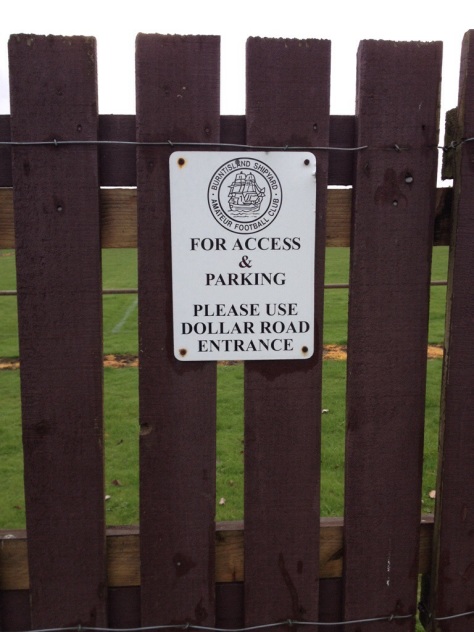 The only problem was that Kinghorn don’t have one. Burntisland, a town five minutes along the Fife coast, have an amateur team with a cracking name so myself and fellow comic Lee Kyle headed to their home.

We’d not really checked anything other than their postcode so when we found it tucked away behind a housing estate, it’s safe to say we were underwhelmed. The lack of any stands at all makes me massively reluctant to call it a ground. It’s definitely not a stadium. We were somewhere between bewildered, underwhelmed and wonderfully amused. Mainly bewildered though. 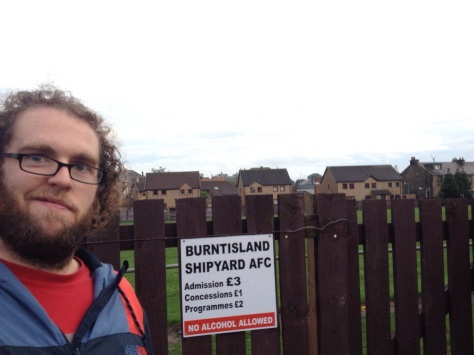 It’s basically a playing field with a fence round it, a club house, toilets and changing facilities. Oh, and dug outs. I think that’s what won it for me. That and the spectacular views. But the dug outs are the tallest I’ve ever seen. Made out of concrete breeze blocks too, they were ugly but the only football related structure that just edges its inclusion in the blog.

There’s plenty of weirdness around. Firstly, the fact that they charge £3 to watch when you could quite easily just stand on the other side of the fence for free. That and there’s a tree behind one of the goals. I’m desperately hoping “Shipyard” like to kick towards the tree in the second half. 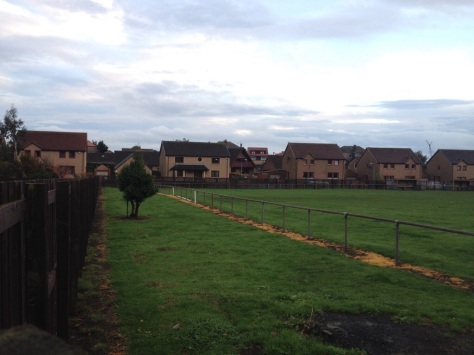 Oh and signs. Loads of signs. Disabled entrances, various signs with prices on, directions for parking, a sign to remind people of drop off zones and not for parking. It made me slightly curious what sort of crowds the club actually get for this to be worthwhile policing to such a degree.

But that’s really it. Lots of trees around the pitch, a nice view off it, and very little else to report on. Burntisland should really just be grateful they’ve snuck on here. 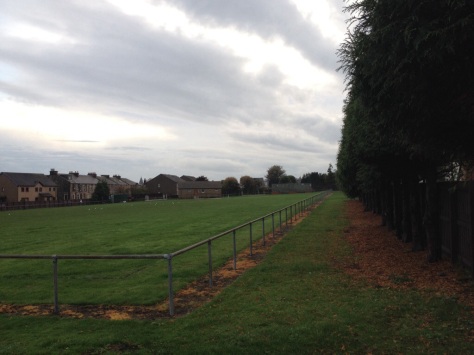 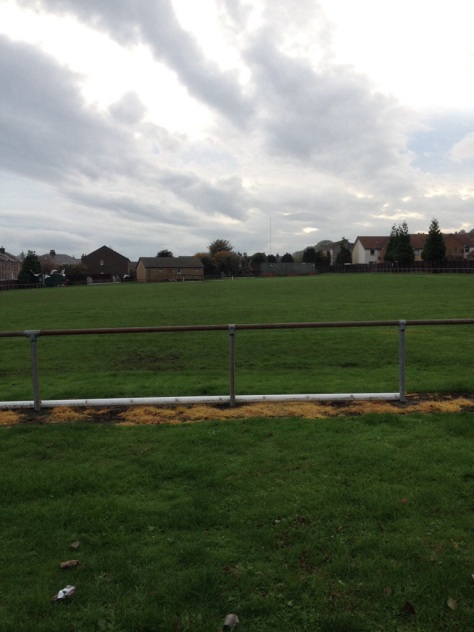 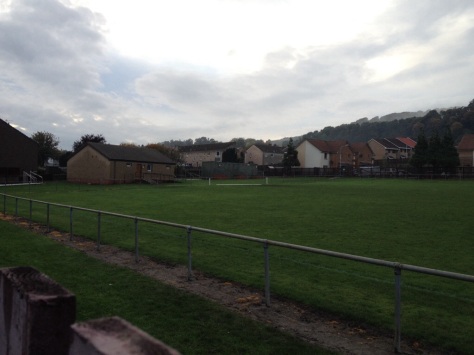